Weird Window Brewing originally opened its doors on July 18, 2020 in the midst of the COVID-19 Pandemic. The brewery closed its doors to in-person service on November 12, 2020 as a result of the COVID-19 restrictions, but continued to offer order pickups and started to distribute throughout the state of Vermont. Weird Window Brewing reopened its doors to in-person service on May 1, 2021 following the loosening of restrictions for the COVID-19 Pandemic. On June 17, 2021, Weird Window Brewing started to operate without restrictions for the first time since their opening. Unfortunately, as of January 2022, the brewery is back, once again, to operating under certain COVID-19 restrictions. The brewery is owned and operated by Jack and Emily Droppa, residents of South Burlington, VT.  Jack manages the brewing operation and Emily manages the taproom, merchandise and events.

Weird Window Brewing has a three barrel pilot system and a fifteen barrel production system. The brewhouse is customized so that both of the systems are on the same brew deck. In addition to the three barrel and the fifteen barrel fermenters, Weird Window Brewing also has a seven barrel lagering tank, which makes it possible to brew and age lagers in the traditional way. All of the brewing and cellaring equipment was purchased from Alpha Brewing Operations in Lincoln, NE. 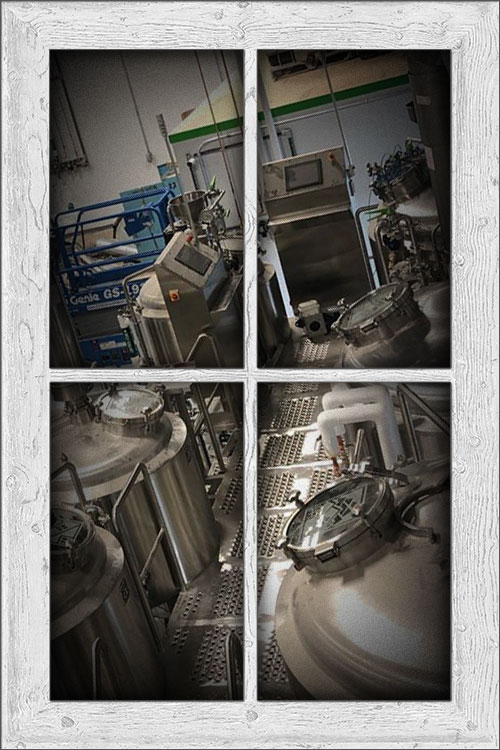 Jack is originally from Ellicott City, MD. Jack has lived and brewed in at least four different states, including his home brewing experience in college at St. Lawrence University in Canton, NY. Upon graduating from St. Lawrence University with a Bachelor’s in History and a Minor in Educational Studies in 2011, Jack moved to Utah to work as a Ski Patroller at Snowbird Ski and Summer Resort in Snowbird, UT. Jack, of course, continued with his home brewing hobby during this time! Jack worked as a Ski Patroller for just over three seasons before deciding to move to Vermont to be with his girlfriend at the time, Emily, in 2015. Jack knew he wanted to work for a brewery instead of at a ski resort in Vermont, but without any “official” experience, Jack decided to do an internship at Anacapa Brewing Co. in Ventura, CA before he moved to Vermont. Jack moved to Vermont once he completed his internship, and Jack was quickly hired on the Packaging Line at Otter Creek Brewing in 2015. While at Otter Creek Brewing, Jack worked his way up to be Lead Brewer in just over three years. In 2018, while working at Otter Creek Brewing, Jack heard of an opening for a Brewer at Frost Beer Works in Hinesburg, VT. Jack was offered the position and worked at Frost Beer Works from 2018 - 2019. It was during this time that Jack thought about what it would be like to, one day, own his own brewery. In 2019, while still working at Frost Beer Works, Jack took a fall skiing and blew out his knee, which resulted in some needed time off from brewing. It was during this time off that Jack learned Canadian Brewery, Farnham Ale and Lager, was looking to sell their South Burlington location.  Jack put in an offer, and, after some back and forth, the offer was accepted and Weird Window Brewing was a reality!

Originally from Ogdensburg, NY, Emily met Jack in college at St. Lawrence University in Canton, NY in 2007. Emily and Jack dated throughout college, and Emily even bought Jack his first home brewing kit as a Christmas present in 2010! Upon graduating from St. Lawrence University with a Bachelor’s in Psychology, a Minor in Educational Studies and a Masters in Counseling and Human Development (and some school counseling AND bartending experience!) in 2011, Emily moved to Utah with Jack. Emily worked as a Middle School Counselor in Herriman, UT for two and a half years before deciding to move to Vermont to be closer to family and friends in 2014. Emily worked as an Elementary School Counselor in West Pawlett, VT for six short months before deciding to move closer to some friends in South Burlington, VT. It was around this time that Jack moved to South Burlington, VT, too. Emily and Jack soon closed on a house in South Burlington, VT, and were married at Stowe Mountain Resort with some of their chosen craft beer on tap in 2017! Recently, Emily worked as the Elementary School Counselor in Vergennes, VT for five years, at which point Emily decided to leave her position at her school to help Jack pursue his dream of owning a brewery in 2019. Emily manages the taproom, merchandise and events at Weird Window Brewing, and helps Jack keep everything clean, organized and running smoothly!

Citra is a three year old Apricot Standard Poodle. Emily and Jack adopted Citra from a breeder in Colebrook, NH in 2018. Even before Citra was officially adopted, Emily and Jack knew they would name their dog Citra, obviously after one of their favorite hops. Citra even has her own beer! We Named the Dog Citra is our 6.0% New England IPA. Brewed with 100% Citra hops, this clean, juicy, citrusy IPA is sure to be your new best friend. Citra loves to play, run around like crazy, say hi to everyone, give hugs and kisses and visit craft breweries. #citrathebrewdog

Do you do call-ahead seating or reservations?

Do you do flights?

Yes! Flights include four 4 oz. tasters of your choice!

Do offer drinks other than beer?

Can i bring my own food or order food to the brewery?

Yes! We love to see our guests supporting other local businesses!

Do you allow dogs or children?

Do you have outdoor seating?

Yes! We have outdoor seating from April - November, weather permitting.

Do you have free parking?

Yes! There is plenty of space in our parking lot, or you're welcome to park anywhere on the street.

Yes! We sell 4 packs and mixed cases of a limited number of our beers. We fill growlers of all of our draft beers in our 750 ml. growlers, unless the beer is also available in cans. We only fill our own growlers, but we hope to eventually fill other 750 ml. growlers. Visit our Menu Page to view our current selections. We also sell kegs of a limited number of our beers. If you’re interested in purchasing a keg please email info@weirdwindowbrewing.com.

Do you offer pickup, delivery or shipping?

We offer order pickup for beer and merch. Visit our Online Store to place an order for order pickup. Orders placed online can be picked up from our taproom during our regular business hours. If you are unable to pick up your order during our regular business hours please call us at 802-489-5279. We offer shipping for merch but we do not offer shipping for beer. We do not offer delivery for beer or merch.

do you distribute your beer?

Yes! We started to distribute to stores and restaurants in January 2021! Check your local craft beer bar or craft beer store to see if they currently have our beer. If not, ask them to order our beer through our distributor, Vermont Beer Shepherd. We also partner with The Daily Planet in downtown Burlington, VT. Check out their menu to see which of our beers they currently have on their beer list!

do you reuse or recycle your can carriers?

Yes! We participate in the Vermont Can Carrier Reuse and Recycle Initiative. Simply bring your can carriers back to a participating brewery or retailer, and they will either reuse them, donate them to another brewery that reuses them, or send them to Casella for proper recycling. We are only one of many breweries in Chittenden County participating in the program, so find a brewery near you and get recycling!

Do you do private events?

Interview with all beer inside podcast

An ale nice by the fire - browsville butcher & patry

The window is open - weird window brewing in south burlington, that is - burlington free press

keeping vermont weird - the other paper

weird window brewing to open in south burlington in Early 2020, with 'a beer for everyone' on tap - burlington free press

Take a Peek Inside